Many moons ago, Niamh from Urban Threads approached me about working on a project involving Alt.Kilt. It sounded like a great idea, and as well as a thought provoking interview, I also popped my modelling cherry. The post has already been featured on Stitchpunk, Urban Threads’ excellent blog, but I had to share it with you here. Enjoy!

First, let’s get one thing straight. I know that’s not a skirt, and I know that Alt.Kilt, the creators and purveyors of the fine and fashionable kilt in this feature, will probably flay me for saying so. But my deliberately provocative title is there for a reason, and that reason is one we probably all know too well. That despite the Scots’ fierce tradition and the general badass-edness of kilts these days, some people will never see them as anything but a man-skirt.

That, I think, is why needlework and skirts, or a highly accomplished art form and a celebrated outfit of Scottish clansmen, go so well together. Because despite the DIY community’s best efforts to encourage and include guys into the fold, it is inevitably with the caveat of it being with extra manly crafts. Carve yourself a new chair! Metalsmith yourself a new planter. Cut up leather and make rugged, testosterone filled wallet things!  Crafts and guys can’t seem to exist without some included excuse as to how this handmade craft is worthy of manly pursuits, and is even more rarely put into the context of traditionally feminine crafts. A man? Knitting? Making something with a needle? Still unfortunately a rarity. Even more unfortunately, a crafty guy is oft celebrated for his boldness of being a guy instead of his actual amazing quality of craft.

What about combining traditionally male things with this perceived feminine craft? Well, also a rarity depending on the context, but that’s why we were so honored when Alt.Kilt asked to collaborate with us on embroidering their hardcore kilts with designs that would suit guys’ tastes. So we thought we’d bring these two sides together: men doing needlework, and needlework for men. We just needed a guy who could take on both.

Luckily for us, there is that guy. The guy who loves needlework for the sake of it, and the pure impressive quality of that craft. A guy man enough to wear an embroidered kilt and do needlework simultaneously, and look pretty rad doing it.

That man is none other than the revolutionary Mr X Stitch, aka Jamie Chalmers, and he’s been working hard through his wildely popular blog of the same name to show that stitching is a pretty wicked medium, no matter who is doing it. Still, despite embroidery’s advances in culture in the last decade, stitching as a guy still has its expectations and associations. We talked with Mr X about his similarly ironic introduction to stitching, and the wider world it led to. Jamie says…

I started for fun as I wanted something to do on a vacation and thought it would be funny to be a big guy doing cross stitch. Turns out cross stitch is a really pleasant craft and I was quickly hooked. I didn’t necessarily intend for things to evolve in the way that they did, but as my interest in contemporary embroidery grew, I decided to get out and make connections over here in the UK.

Through a growing love and by visiting events like the Knitting & Stitching Show, Jamie got to know magazine editors and other members of the UK craft scene, and things started to grow. Still, it’s not easy being a guy with a needle and thread.

Things are still evolving, but these are exciting times. I’ve gone through a fair few personal journeys in coming to terms with the socio-political paradigm that says that cross stitch is for grannies. I made myself do things like cross stitching on trains and in public, and some of my stitcheries have explored these feelings as well.

The biggest challenge for me was joining my local Embroiderers’ Guild branch – being a manbroiderer is easy online, but in the real world, in my home town, it’s a whole ‘nother matter.

Facing up to the stereotypes of stitching is difficult enough for embroidery in any context. The current world of embroidery started, like many revolutions, with a backlash statement that it was something that could be alternative, grungy, snarky, and counter-culture. That was perhaps easy to embrace from a woman’s point of view. “See!?” we said with our defiant needles, “We can reinvent this traditionally feminine craft and make it something new for ourselves!”

That was a great start for women, but it made it a slightly more difficult take for guys, who are still trying to deal with both the traditions and the new social associations of a reinvented feminine craft. This is especially hard when faced with a real, social craft world that the DIY culture has become. Where do they stand in this art, if it’s not for an assumed social statement?

It’s great to meet other men who stitch, as we’ve all gone through the same experience. The paradigm I mentioned before is very pervasive and I think all male stitchers have had to process the social responses to their craft. And I don’t think that’s going to change just yet.

Machine embroidery in many ways is going through a similar cycle, albeit a few years later than the traditional hand craft. The industry was slow to respond to an alternative idea of embroidery, which was in fact the very catalyst for the creation of Urban Threads. Things were more attainable for those who could just pick up a needle and thread and make things for themselves, but for machine embroidery, it meant waiting for a whole industry to turn around and notice. Its application can also be its biggest barrier to new audiences. If all you see of machine embroidery as a guy is logos on golf shirts and trucker hats, what is your expectation of the medium as an art form? This is a thought shared by Mr X:

One of the biggest issues with embroidery is that it is often just an aesthetic product. I think that men often like crafts that are more practical, so the current expansion in digitized embroidery, as championed by your good selves and our man Erich Campbell, is a great sign as it shows that men can pimp their clothes, as well as their cars. Hand embroidery is a great craft for soothing the soul, as it is both meditative and creative. However, it’s still quite a way from being cool in the mainstream and so we (the stitchers who want to change this world view) must use all the directions possible to overcome the paradigm that we face.

So where does that leave digitizing, and machine embroidery as an art form for guys? Well, as Mr X puts it optimistically,

I think there are some technological barriers with digitizing, but men like gadgets.

Well, he’s not wrong about that.

Sadly, he’s also not incorrect about it’s barriers. While machine embroidery might in some ways have the wizard-tech appeal to perhaps lure in tool-minded guys, it is still a relatively unknown and cost-prohibitive medium to dive into with abandon. Couple that with expectations of what kinds of designs are out there to even interest guys, and it’s still a large hurdle to overcome as a medium with artistic merit. 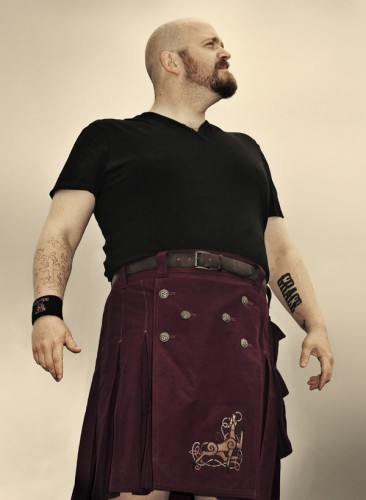 So, what’s the biggest barrier was to getting guys into craft, hand or machine alike? What can we do to get more guys into the fold, so to speak? Jaime has a couple of ideas of where there can be room for improvement.

The embroidery industry has a part to play in the reason why men don’t stitch. There’s not a lot out there for them to enjoy – a simple visit to any major craft store validates that statement. However, the changes in technology that we’ve seen in pattern design software and digital printing will go some way to changing these perspectives as it allows more creativity to come from the individual at home.

Perhaps embroidery’s biggest problem then is its assumed use and audience. If we can get past the “who” and the “what for,” maybe we can just look at it as pure design, out of context of what we think it should be. That, luckily, is exactly what Mr X Stitch and many other contemporary craft blogs and communities are working hard to do.  For example, the Mr X Stitch blog has a section where you can read specifically about contemporary male embroiderers in their eMbroidery feature. A vast wealth of artists are using the internet to bring a voice to their craft, and it’s hard to think that with enough exposure people will only ever associate “craft” with doilies, wooden ducks and grannies. Handmade has come back in a big way, and men have never shied away from making things with their hands. It’s just that we need to change our ideas as to what those things they might make are.

It’s good to see that the internet is enabling artists from around the world to discover one another and be inspired by each other. I think the prevailing schools of thought about gender and embroidery will remain for a while, however if the mainstream craft industry shifts to accommodate these changing views, and if the profile of embroidery as a valid art form and a craft that men can enjoy continues to rise, then we’re in with a shot.

Perhaps the most optimistic way of looking forward, then, is through the experience of sharing and collaborating on what embroidery is, and what it can be used for. We were absolutely thrilled to get a chance to work with Alt.Kilt and custom embroider one of their awesome creations to showcase on one of the manliest dudes in the embroidery world (we love you Mr X!). Their interest in utilizing embroidery and even machine embroidery as part of their traditionally guy-friendly offerings (though I wouldn’t mind one myself) is a good sign of things to come. Hopefully, the more we show that putting needle to thread results in cool things no matter what your gender, the more we’ll see people take it up in new ways. Reassuringly, the guy with arguably the most accurate finger on the pulse of the embroidery world seems equally optimistic about the medium.

I know that the stuff we do with needle and thread is really powerful on a spiritual level as well as a practical and political one, so I remain absolutely optimistic that we can turn the tide and get more people to share the love of the stitch.  We’ve barely gotten started, and I think people had better watch out!

Many thanks to the folks who worked to pull this feature together spanning two states, two continents, and many months. To Alt Kilt for providing such an awesome creation to display embroidery on, Mr X for being such a good sport about modeling, and Emma Beckett for the photography. Love those Celtic designs on the kilt? Grab em’ right here. – N

This project is part of  The Lab, an Urban Threads initiative to experiment, collaborate and innovate to see just what can be done with the art of embroidery.
Check out the other projects on our blog by searching for the UT Lab tag.

Painting With Thread by Helen Adams