Digitizing for Non-Digitizers – 4 Basic Editing Skills to Save Designs

Craftivist campaign launches after survey shows 17 percent of British shoppers would shop more often at Marks & Spencers if it paid a Living Wage.

The Craftivist Collective is joining forces with ShareAction’s AGM Army this summer to press UK retailers to pay a Living Wage. The campaigners are coordinating a series of “stitch-ins” at branches of Marks & Spencers across the UK, for crafters to sew hand-made messages onto M&S handkerchiefs, to be delivered to the board, celebrity endorsers, and major shareholders of the British retail giant at its annual general meeting at Wembley Stadium on July 7th.

An online poll shows 17 percent of British shoppers would shop more often at Marks & Spencers if it paid staff a Living Wage. (Source: Opinium survey, 12th – 16th June 2015, based on 2002 online interviews across the UK).

The first “stitch-in” will take place on June 22 in London at 6:30 pm outside the Marks & Spencers on Liverpool Road, N1 0PR. Another “stitch-in” is scheduled for June 24 in Cardiff, another in Brighton on June 29, and another in Milton Keynes 30th. There will also be stitch-ins in Lincoln, Edinburgh and Birmingham amongst others.

The idea of the “stitch-ins” is to show M&S that in addition to major shareholders with billions of pounds under management, its core customer base is also fully engaged and supportive on the issue of the Living Wage, and that they expect the company to show leadership on this basic fairness issue.

Each unique hand-stitched hanky encourages board directors of M&S to commit to paying the Living Wage of £9.15 in London and £7.85 across the UK to all staff. This is a part of ShareAction’s campaign in partnership with Citizens UK to achieve the Living Wage across the FTSE 100 through shareholder activism. Nearly a quarter of FTSE 100 companies have now accredited with the Living Wage Foundation, but no high street retailer has yet signed up.
ShareAction has organised AGM questions on the Living Wage at more than 20 company AGMs so far this year.

ShareAction is simultaneously mobilising an Investor Collaborative for the Living Wage made up of institutional shareholders with billions of pounds in British companies, including asset managers, pension funds, charity and faith investors. These large shareholders have written in 2015 to all of the FTSE 100, including M&S, in support of the Living Wage.

Crafters will be giving M&S handkerchiefs with personalised positive messages stitched into them to all 14 board members of M&S, as well as to its largest shareholders, and to the 2014 celebrities who feature in the company’s ad campaign: Annie Lennox, Emma Thompson, Alex Wek, Rita Ora, Dowreen Lawrence, Lulu Kennedy, and Rachel Khoo. 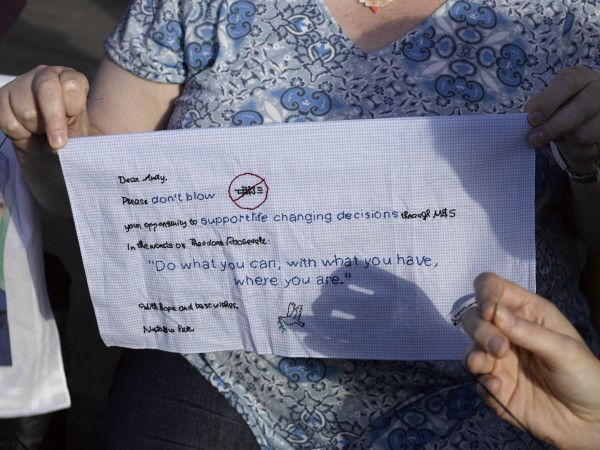 They will also be handing out 250 special handkerchief craft kits with a Living Wage message printed on them to shareholders at the company’s Annual General Meeting, so that shareholders can stitch too, to encourage themselves to support the Living Wage. These kits include an ethical hanky, needle and thread, instructions, and a briefing note on investment risk.
M&S Chief Executive Marc Bolland is paid £2.1million a year. Last year, his company refused to consider a Living Wage at its Annual General Meeting. Later, at a meeting with campaigners, the company again refused to consider paying the Living Wage.

Sarah Corbett, founder of the Craftivist Collective, said: “Marks & Spencer is supposed to be a company with solid values threaded through all that they do, which include paying your workers fairly. We’re sending the board and shareholders these carefully hand-stitched handkerchiefs to encourage the company not to ‘blow’ their chance to support life-changing decisions.”

Catherine Howarth, Chief Executive of ShareAction says: “This craftivist initiative at the M&S AGM is nothing to ‘sniff at’. Sarah and her amazing stitchers are devoting hours to creating gifts the M&S board we hope will treasure and remember forever. People adore M&S but they want to see the company step up and become a Living Wage employer. The many big shareholders backing this call know it makes business sense as well as being the right thing to do.”

Digitizing for Non-Digitizers – 4 Basic Editing Skills to Save Designs

Quilty Pleasures-The Finishing of a Quilt