The Downton Abbey movie is finally here! It’s like milliners’ Christmas. At least, it is for me! I couldn’t wait a moment longer to see it, so I saw the first available showing in my area, which was the special preview on Sept. 12.

So let’s talk about the hats! Limited by what images have been publicly released or are seen in the trailer…

When I first saw the trailer, I said “OMG, that hat!” Maybe I’d just already made up my mind ahead of time, but after seeing the movie, it’s still my favorite hat in the film.

Here’s a look from the back: 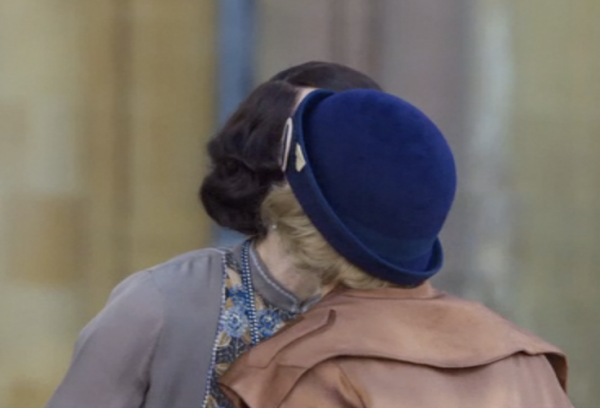 Later we get these three hats from the ladies. Edith’s is fine. Mary’s is better. The feathers and loops make it look very much like what a milliner would make today. Cora’s is an interesting color (better seen onscreen), a kind of muted chartreuse.

But… the hats were overshadowed by Mary’s stunning dress, which you can see peeping from under her coat. So 1920s! So gorgeous! And costume designer Anna Robbins said it was one of her favorite costumes. I don’t blame her.

We get a new hat-wearing lady in the character of Lady Bagshaw (Imelda Staunton). The brim of this hat turns up all the way around, so I didn’t like it as much from her right side. But the front and left are lovely. And the color is terrific. 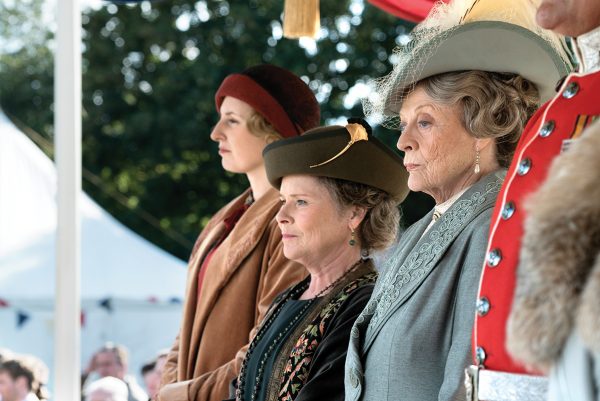 I wish we got better looks in the movie of this red hat of Edith’s. It’s another favorite of mine. And Maggie Smith (as usual) gets some of the most fabulous, almost fedora-style hats.

Mary’s hat in this scene is striking! I haven’t quite made up my mind how much I like it. But it’s fun to know that I could create a replica if I ever wanted to cosplay as Lady Mary. I left the theater so excited about creating new hats!

I was going to put in an image of Mary’s cloche from the trailer when she goes to see Mr. Carson… but it’s just so bland and boring! Nothing wrong with it as a costume piece. It’s totally appropriate for the character and scene and context. Just not very exciting.

So I’ll finish out with this…

Wait, that’s not from the movie! This is from season six! … But I could have sworn I saw this exact hat make an appearance — just a fleeting glimpse! — on an extra in the parade sequence.

I’ll have to see the movie a second time to judge. I wonder if I get a prize for finding a movie Easter Egg if it is the same hat…

Hi everybody! It’s another Not Safe For Work Saturday where we bring you the sassier side of stitching! These are not for the faint of heart, so if you are easily offended, it's...

Welcome to Manbroidery, a series of interviews with men who stitch. This time we interview Walter Bruno Brix who plays with textile illustration to explore history and identity.