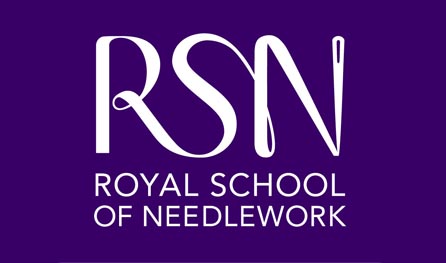 An exhibition of colourful international embroidery at the Royal School of Needlework.

Peacocks and pomegranates have long been used as motifs on embroidery in a wide range of cultures. Running from January until July 2016, the ‘Peacocks & Pomegranates’ exhibition will feature pieces from the Royal School of Needlework’s Textile Collection. It will include objects from China and India, as well as from Western Europe, which either take these icons as their central motif or feature them prominently. 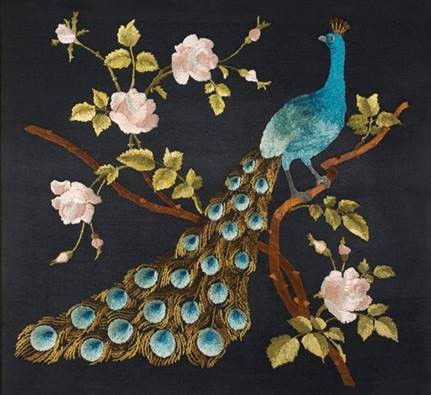 The peacock represents a range of meanings: in the Christian world these include resurrection from the annual renewal of his feathers and immortality from the belief that the peacock’s flesh did not decay. In the east there are interpretations of nobility, protection and integrity. All cultures seem to recognise a sense of beauty, though some show that when taken too far, this becomes pride. Peacocks may be depicted with or without the tail feathers displayed. 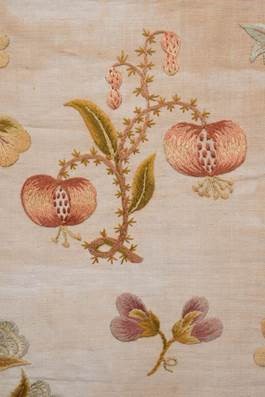 The pomegranate represents fecundity in many societies because of the almost uncountable number of its seeds. In the Christian Church it was taken to represent the number of the faithful, again a number too many to count. This is why it is usual for the pomegranate to be shown partly open, revealing the hidden seeds.

Goldworx – The Lost Dress of Elizabeth I 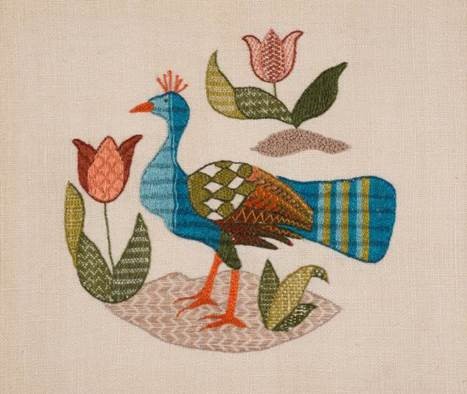 Visitors will see some exquisite pieces and some fun objects, including peacocks, worked in a variety of threads, beads and metal threads from India. The design for the central panel of The Vain Jackdaw by Walter Crane will also be on display, along with pieces which represent the beauty and pride of the peacock. This is seen in examples of attire, for instance on two 18th century men’s waistcoats and on a selection of accessories.
There will be about 100 pieces in the exhibition representing a variety of materials and techniques.

The Royal School of Needlework ‘Peacocks & Pomegranates’ exhibition runs from 27 January to 22 July 2016 and is generally open one week per month to groups and private individuals.  To book, go online to http://www.royal-needlework.org.uk/shop/index/60 or contact +44(0)20 3166 6932