It’s no coincidence that this month I am blogging about giant plush. I just finished making a huge totem pole, at eight feet tall my biggest plush to date.

Many reasons can be found to NOT make such an enormous plush such as space, cost and “what the hell do I do with it now?”. If you have the inclination and find the opportunity you will find that people will fall in love with it and treat you like some kind of a hero for being the creator of such a thing.
I have a couple of plush making friends who themselves have had the chance to make some giant plush, Abby of Abbydid and Diane of Cutesy but not Cutesy. I came up with some questions for myself and them. 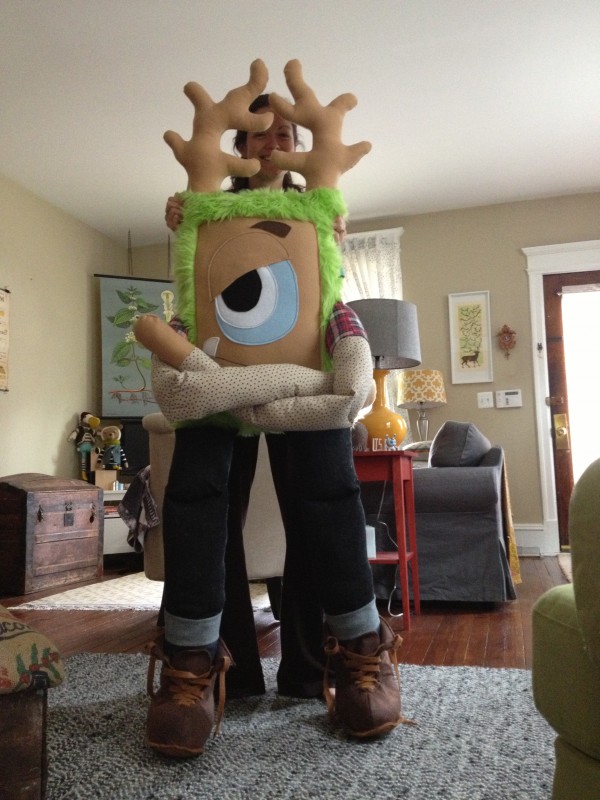 – Did you make your giant plush for a for a specific purpose or project or was it just on a whim?
Abby – Stompy McThumperton was a personal challenge I gave myself for the Cincinnati Mini Maker Faire. It was the first time for the event in our city, and I wanted to participate by bringing my biggest, craziest plush ever! He is just under 5 feet tall, but is over 5 feet in circumference thanks to his tail and humungous arms, each of which took 10 feet of fabric all by themselves.
Diane – I originally made Steven, the life-sized Grumpster, for the “Stitched” group show at Clutter Gallery in NY.
Me – I was asked to make this for a local artist Shawn Hunt. It is his idea and design, my job was to make a pattern and create the 3D item from his original drawings. When he asked if I was interested I just knew this project was for me!

– Was there any special planning or considerations involved.
Abby – I wanted Stompy to be interactive, so he had to be stable on his feet and I wanted his hands to bounce when dropped. I also wanted to be as environmentally responsible as possible. Another consideration was making him transportable – he takes up my ENTIRE minivan! I upcycled trash cans for his feet, which are detachable, and I used a donated couch for his stuffing. Yoga balls make up his hands, which are a little bouncy when dropped, but more importantly people can sit on his them and pose for pictures. He is a HUGE ham and LOVES posing for pictures! Also, he has a pocket mouth, which is sort of something I became known for including in my plush. I’ve had several folks ask if they can put their babies in it. (I wouldn’t recommend that;)
Diane – I really didn’t plan ahead. I just started cutting out life-sized pieces that were larger than myself without really thinking about it. I just knew I wanted to make something as tall, if not taller than me. It wasn’t until I got to stitching up his limbs that I realized I had to actually make life-sized jeans for him. I’m not a clothing designer but I learned pretty quickly. And then came his shoes…. I had no idea I could make shoes but once I got the basic structure down for them I had a lot of fun adding the details, like the soles on the bottom of the shoes.
Me – I am happy to hear that I’m not the only one who is a bit minimal with the planning. I did make a mock up that was about 2 feet tall and enlarged my pattern from that. I had to do some planning as the details had to be correct, things such as the position of the eyes and the proportions. Shawn and his family are know for carving in a certain style and the plush version had to be as close as possible. I also had to put some thought into how this thing was going to stand, the fabric alone is heavy even before stuffing.

– Were there obstacles that presented challenges and what did you do to overcome any difficulties.
Abby – Sourcing enough fabric for the arms became problematic. I chased down wool felt all over town. There was much more of hand stitching involved than I anticipated. I became pretty good with a curved upholstery needle.
It’s not unusual for me to rush into a project headfirst without a clearly laid out plan, so rolling through the obstacles that rise along the way is par for the course for me. Having said that, Stompy came into being relatively easily, and looked exactly how I hoped he would!
Me – one of the main things was an internal structure. It is designed to have the top wilting to one side which of course means that the center of balance is off so a very heavy base was needed for stability. I used plastic pipe inside the bodies and across the wings. The pipe sits into a heavy concrete base and a box was built up around the concrete. To help with all of that i mixed my stuffing with styrofoam beads to add volume without weight.

– What was people’s reaction to seeing your giant plush?
Abby – The reactions have been fantastic! It has been so gratifying to see folks’ faces light up when they first see Stompy. And THEN when I suggest they sit on him and get a picture they are so excited. Kids, of course, are especially drawn to him, but adults immediately regress to their childhoods when they interact with him. That’s the power of plush!
If ever in Cincinnati, Ohio, you should definitely come by and meet him. Stompy McThumperton lives in my studio, #108, at Essex Art Studios, where we have quarterly art walks. This is where he meets most of his fans. Another great place to find him will be at the Cincinnati Mini Maker Faire September 13 & 14, hanging out at the information booth and acting as ambassador of the event, making sure everyone has the help they need.
Diane – People always want to take pictures with Steven when they see him. Luckily he’s pretty laid back about everything and doesn’t mind that much. A lot of people think there’s a real person sitting inside so it’s funny to see them act a little cautious around him. Some day I would like to make another one that can stand on its own but for now he’s very good at sitting and leaning against walls, I guess he’s a little lazy.
Me – People loved it and were hugging it, which was funny to see in a serious art show, I mean they weren’t touching any of the other art. It certainly appeared to have a wow factor, maybe because it seemed out of context or maybe because next to a giant plush you can’t help but feel like a kid again.

Becky Gould is the big kid behind Scrumptious Delight. Working from her home in Vancouver, BC she makes plush toys and soft sculptures that combine a love of food, all things furry and an unnatural appreciation of small appliances.

Becky Gould is the big kid behind Scrumptious Delight. Working from her home in Vancouver, BC she makes plush toys and soft sculptures that combine a love of food, all things furry and an unnatural appreciation of small appliances.