Big props to manbroiderer Keith Clark who came up with a great piece of craftivism that made it into the national press here in the UK. 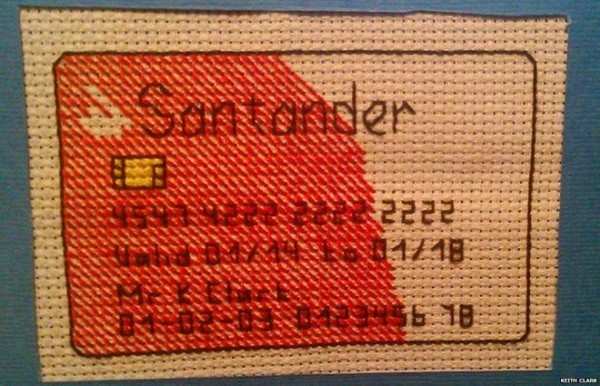 Keith Clark posted a message on the Santander UK Facebook page explaining his frustration. He had ordered a replacement card after his was cloned at the end of April, something he praised the bank for flagging up.

However, he was less impressed with the time taken to provide a replacement. He says he was told one would arrive within 8-10 days and when it didn’t, he went into a branch, only to be told one hadn’t been ordered.

He says he immediately ordered a new one. But this didn’t arrive. He decided to start stitching on Monday, 19 days after ordering his card. Then he posted it.

His creation arrived at Santander’s head office on Wednesday morning, having been sent using the Royal Mail’s recorded delivery service.

“My motivation was I found it unbelievable that it takes 8-10 days to make a debit card and send it to me so I thought I’d wait and see how long it takes to get something to them,” the 29-year-old says. “If I can knock something out and send it within three days, why can’t they?”

Clark has previous experience when it comes to cross-stitching. Eighteen months ago the west Londoner started stitching portraits of R&B stars and DJs to “kill time on the Tube”. But he’s been taken aback by the reaction on social media to his bank card.

Pockets of millinery not caught in the digital age