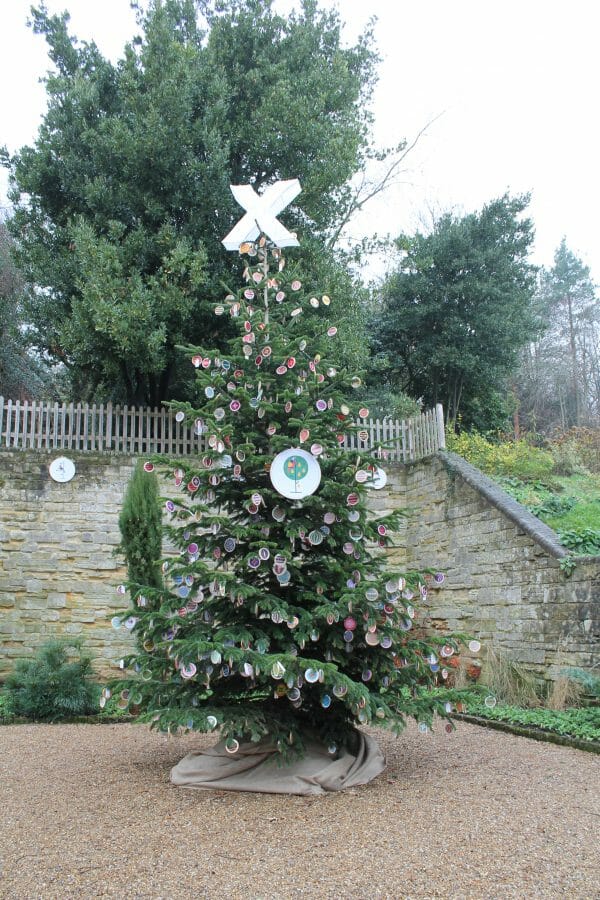 HI everyone, it’s your ever-loving Kingpin, Mr X Stitch here. I wanted to wish you a wonderful Christmas and to share the story of the Standen XStitch Xmas Tree project, to share a bit more stitchy goodness around the world on this special day. It’s fair to say that the project was a fantastic success! 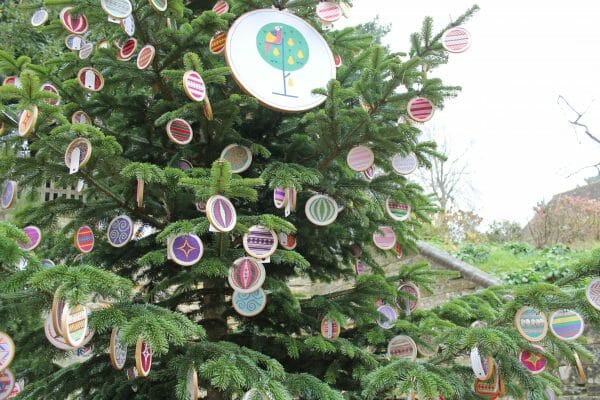 Starting in March at the Spring Knitting & Stitching Show, people were invited to stitch any of four initial, and two additional, cross stitched bauble designs in whatever colour and fabric they liked. You can still get the patterns at our bauble page if you want to stitch some for yourself! 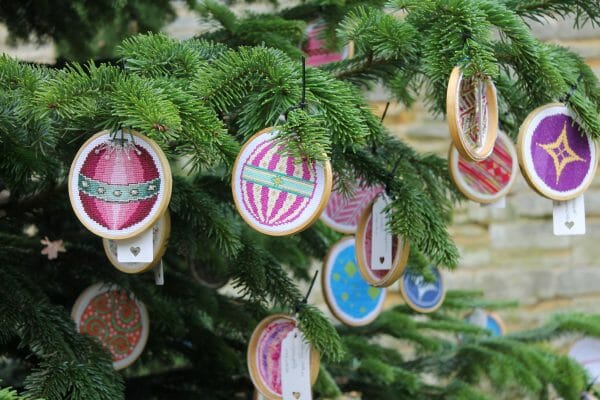 When the project began, it was anyone’s guess as to the end result, and as a backup I commissioned a 12 Days of Xmas project to be stitched on 18 inch quilting hoops at the same time. I needn’t have panicked though, as the global cross stitch community never fails to impress and by the time the deadline passed at the end of October, over 800 baubles had been stitched! With an estimated average of ten hours per bauble, that’s an incredible 8000 hours of stitchy love! 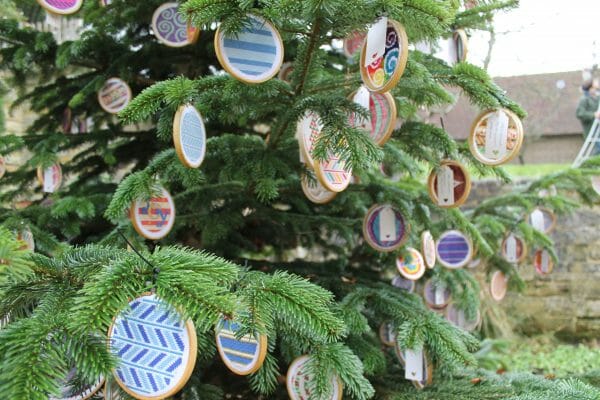 And so it came to pass that at the start of November 2018, we began putting the baubles onto the Tree, and then placing them around the surrounding courtyard and other parts of the Standen grounds. Indeed there were so many baubles to choose, that we were able to festoon them all around the place!

It was surprisingly easy to lose count of the number of baubles put in the Tree itself, but I think there were about 500 on the actual tree, with the remainder placed in all manner of spaces for the enjoyment of the visitors. 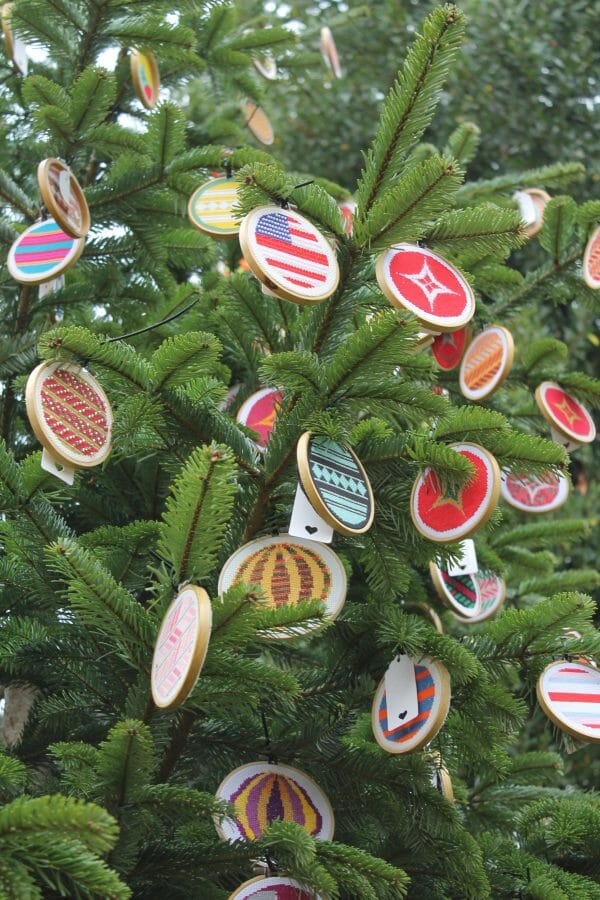 By the time we’d finished all the adorning, the Tree looked amazing. It has a triple whammy effect – you see the tree from a distance and it looks nice with lots of coloured baubles, then as you get closer you realise that they are all handmade, and then upon inspection, you see the labels and realise that the baubles are stitched by people from all over the world. It’s another reminder of why cross stitch is such an amazing craft form, as this multi-layered delight is something that everyone can appreciate. 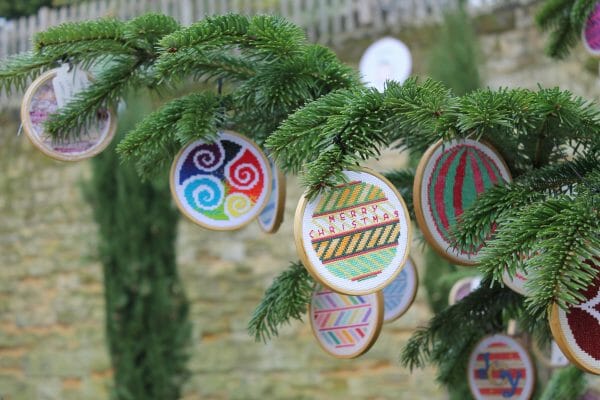 On the official launch evening, I did a presentation which got quite emotional – dagnammit if I didn’t get a bit choked up by the loveliness of it all! – and in which I shared a few facts and figures:

We got baubles from 16 countries, including Bermuda, Finland, Italy, Australia, USA, Hungary, France and the United Arab Emirates. 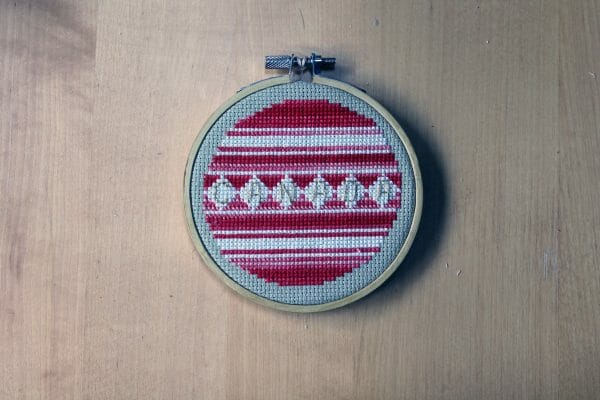 The most popular bauble design was the Diamond pattern, as used by Nicole Boomhour from, um, I can’t recall which country… 🙂 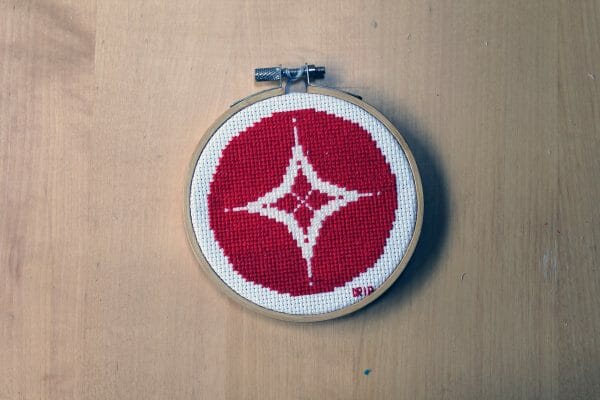 Red was the most popular colour choice, with purple coming a close second, but it was wonderful to see so many colour combos, including a lot of variegated thread use!

The most prolific stitcher was Alda Christie, from the Sackville Lacemakers group in East Grinstead, who came to two of the workshops we ran in the local area, and who produced ten baubles within the allotted timescale! 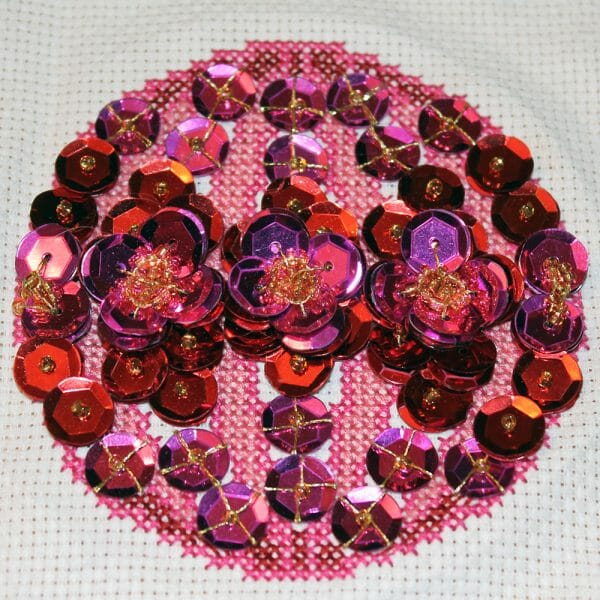 Emma White from Brighton produced a series of amazingly embellished baubles but this sequinned number won the award for the most blingtastic bauble! 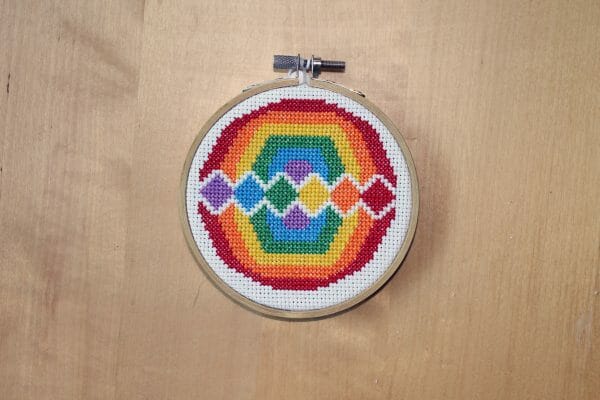 There were many rainbow baubles but Val Coleman’s version packed a real Hawaiian punch (because that’s where she lives!) 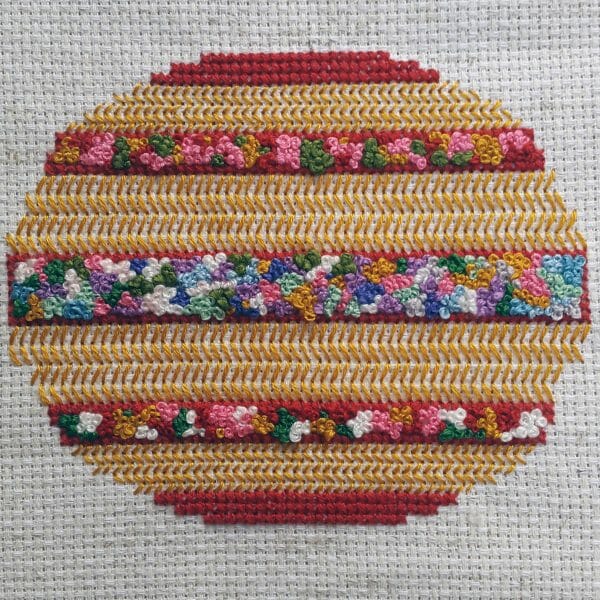 Elise Deschênes-Armstrong included a few French knots in her bauble – 857 of them to be precise! 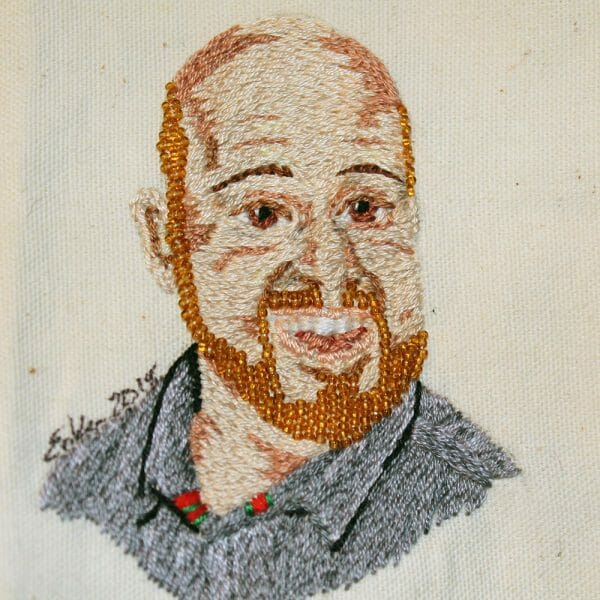 And Erika Hagberg created a bauble that amazed me, but might very well horrify unsuspecting visitors!

There were so many baubles that I can’t share them here, but I did create a hypnotic video featuring 400 of them:

We got an amount of press coverage as well – this video from the BBC was nice!

And the National Trust created this little video of the installation!

The XStitch Xmas Tree really has been an amazing project to coordinate and a really overwhelming experience. The feedback from Standen has been really heartwarming and I want to thank every person who took time to stitch a bauble or two for the project. To donate your time for an altruistic project like this is truly wonderful. 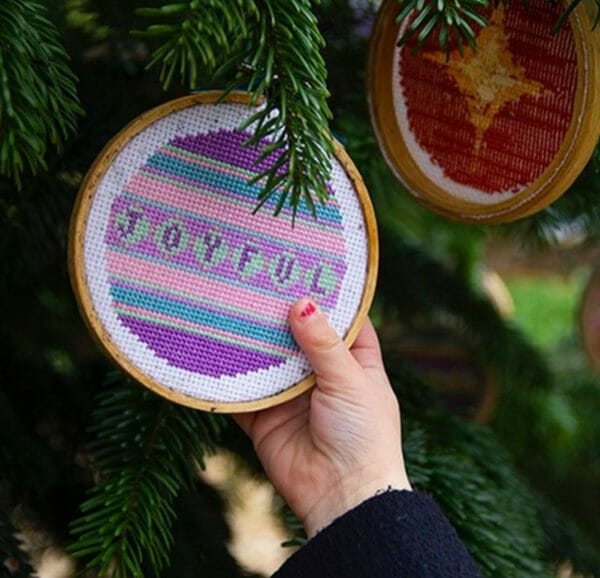 The XStitch Xmas Tree is on show at Standen House until 6th January, at which point the baubles will be assessed for weather damage and the best ones will be donated to good causes like the Children’s Ward at the Queen Victoria Hospital in East Grinstead. Visit the Standen House website for more information on this lovely property and visit it while you can!