Dena Lenham, aka KreinikGirl, is Creative Director at Kreinik Manufacturing Company, a family-owned, USA-based business that manufactures high-quality yarns and threads made of metallics, silks and real metals from their West Virginia factory. Dena’s monthly column, Kreinik Calling, sheds light on the fascinating fibres that we all use and love. 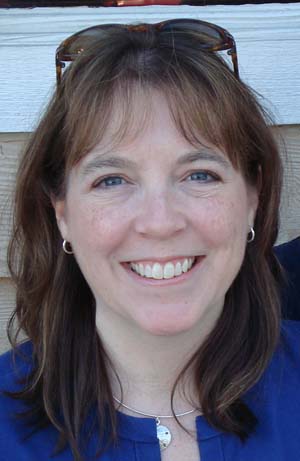 I’ve been stitching since I was six years old, when I used all my grandma’s tape to “sew” doll clothes. She taught me to sew, embroider and crochet, and my mother did all of these with me too. My sister taught me to cross stitch when I was about 23 years old. I was a newlywed, and my husband traveled a lot in the US Navy. I needed something to keep me busy late at night. I was hooked immediately, and got a job working for Kreinik the thread company in part because I knew how to use cross stitch charting software. For once I could use my English degree and stitchery knowledge for a paying job. I’ve worked for Kreinik since 1996.

I love that you can “paint” or draw with thread on anything. I was always a rudimentary artist, but embroidery enabled me to create colorful images, even if I was just following someone else’s pattern. Plus thread is so dimensional, so tactile, that to me it is infinitely interesting to see how people combine different fibers with stitches to make pictures and express thoughts, emotions, memories, and dreams. Stitchery is a dimensional, texture-filled medium for self-expression, and I think it’s good for mental health too.

The modern craft scene is exciting because it is shared instantly over social networks, crossing cultures and countries immediately. Visual sites like Flickr, Etsy, and Pinterest are so inspiring, you can’t help but be excited about creativity and want to make things yourself. The modern scene is liberating too. People are going beyond the norm, beyond the rules, and using needlework in much more individual ways, and that just encourages more people to get involved. Each generation has done needlework within their cultural, political and social settings, but the internet has made this current scene more viral and exhilarating.

Ha! “Unusual talents”?! I’m so boring! The last two years I’ve been taking care of my elderly parents, so I’ve become an amateur nurse, oncologist, gastroenterologist, interventional radiologist, and geriatric specialist. I am very talented at watching sports—hockey, baseball, auto racing, and (American) football in particular. I do cross stitch, crochet, needlepoint, sewing, embroidery, punchneedle, Hardanger, paper crafts, quilting…but that’s not so unusual in this group! In previous decades I played the violin and piano, worked with homeless drug-addicted Vietnam veterans and their families, and wrote for a boating newspaper in Southern California. I think it’s time that I work on an “unusual talent” though – open to suggestions!

This site uses Akismet to reduce spam. Learn how your comment data is processed.